Blogging for a Good Book 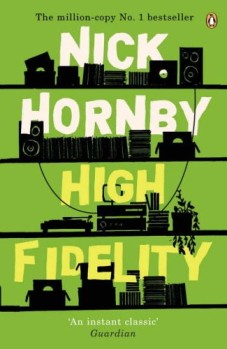 I started off the week with Nick Hornby’s collected essays about books, so it seems appropriate to end the week with one of Hornby’s novels. High Fidelty is my favorite, and I recently reread it in ebook form.

As can be seen in his essays in Songbook, Hornby not only loves music, but he can write about songs, performers, and listening to music with affection and understanding. High Fidelity recounts the story of record store owner and occasional DJ, and inveterate list-maker, Rob Fleming. When the story opens, Fleming is making a list of his “desert-island, all-time, top five most memorable split ups,” which he then shares with the reader. Sadly, or not perhaps, his current breakup does not make the top five list. But it is his relationship with Laura, the current breakup, that drives the story.

Well, that and music. For Rob–and Dick and Barry, his two…

There are some books that you read, and know you will then read again all through your lifetime. Here are a list of mine.
The Far Pavillions by M. M. Kaye
Shadow of the Moon by M. M. Kaye
Lord of the Rings by Tolkien
Gone With the Wind by Margaret Mitchell
Northanger Abbey by Jane Austin
Jane Eyre by Charlotte Bronte
Travis McGee series by John D. MacDonald
all of Rummer Godden’s books
Nine Coaches Waiting by Mary Stewart
The Rosemary Tree by Elizabeth Goudge
The Shipping News by Annie Proulx
Phantom by Susan Kay
all of Rosamund Pilchers books
The Dwelling Place by Catherine Cookson
Girl from Goldenhawk by Violet Winspear
The Bronze Horseman by Paullina Simons
all of Agatha Christies books
Peachtree Road by Anne Rivers Siddons
Harry Potter series by J. K. Rowling
Twilight by Stephanie Meyers
Dracula by Bram Stoker
Frankenstein by Mary Shelly
* * *
These are just a few really, because there are other books and series that I read and read again as well. I never get tired of them and usually will read the same book every couple of years and sometimes every year. A change in seasons is the catalyst for me. At the first hint of summer, when I’ve traveled up to Georgia from my home in Florida not too far away, I will feel the need to find my copy of Gone With the Wind, and then as the days grow warmer I will feel the need to revisit John D. MacDonalds fabulous Travis McGee series.
A great author can do that, write a book that brings you back again and again. Even though you know the plot and remember what happened, the dialogue and charaters, and small bits in the book will provide fresh and wonderful reading pleasure no matter how many times you go back and read it again.

Blogging for a Good Book 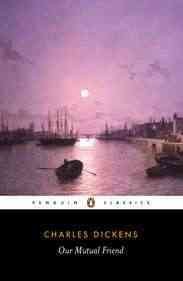 Each winter I try to read something from the 19th century that I have not read before. These sprawling, character-laden stories seem to be just the thing for reading the winter blues away. I had intended to get started on something over the Christmas holidays, but circumstances prevented me, so in January, on the recommendation of a colleague  ~ thanks, Penelope ~ I dove into Our Mutual Friend .

Dickens’ last finished novel is, in some ways, a recapitulation of many of his earlier themes; poverty, social climbing, unscrupulous lawyers, and loving families all make appearances. It is also typical Dickens in its many plot lines that run in parallel for so long that you cannot see where they are ever going to intersect or even resolve. And, to be honest, they do not always resolve cleanly; some plots just seem to drift away and are never heard from again…

My earliest relationships weren’t with actual boys, friends. I didn’t manage to catch the eye of the cute kid in math class or Peter Brady or even Daniel, the first boy to earn a sappy valentine in second grade.

They were with book characters.

I fell for bookish leading men long before I dared to express my feelings to any real-life ones. Relationships in my favorite novels taught me about relationships in general, especially in those impressionable teen years, and I feel like I’m a better reader — and person — because of it.

Though I am, in fact, a happily married lady, my devotion to my flesh-and-blood husband does not negate the underlying passion I can feel for literary men. We’ve all been there, right? Sometimes you can’t help but fall into a bottomless pit of yearning for some…

Daphne du Maurier and other such authors.
I can’t express the almost physical hurt and frustration I feel when reading reviews, or thoughts, held by readers of authors like Ms du Maurier. So many of them seem to read these books with current day interpretive expectations. This is unacceptable. You wouldn’t read Dickens or Trollope with the same expectations regarding peoples behavior and what lies behind it, as you would , say, James Patterson. It’s important to remember that authors who wrote during the mid twentieth century were also writing in a different sort of world. Yes there were modern amenities, cars and planes and electricity ( though not for everyone ), but socially, in many ways it was almost as different from now, as when Dickens was spinning his tales.  One musn’t be exasperated with the behavior of a heroine such as ours in “Rebecca”. Certainly shyness can exist in any generation, and how much more so during a time when women in general were a more retiring group. While Rebecca herself, a woman of great beauty and confidence might behave with a certain bravado, the second wife of Maxim might not. Also, central to this particular story, it would not do to have her behave with a worldly sophistication.  Communication seems to also be a favorite unfavorite, but is that really fair? Even in todays society how many times is non communication at fault for misunderstandings and strife. It’s as common as any other interaction between a man and a woman. It only makes sense that it would play an important part in a story such as Rebecca where you have an older man and a younger woman. He, very much a man of the world, well traveled and wealthy, and she a companion to women twice her age, almost a servant really, poorly paid, young and with no family of her own. She is somewhat in awe of Maxim even though she is in love with him. With these ingredients we find Ms du Maurier making a dish of suspenseful gothic fare. Without these ingredients the story could not exist. Our heroine would be confident of herself and either not marry Maxim at all, or turn out all the servants and air out the house ridding herself of all the old memories and Mrs Danvers to boot. If you think this is a good idea, then you need not read gothic suspense from a certain period anyway.  This sort of book, which Daphne du Maurier excelled at, needs to follow an avenue of actions and behavior, to succeed at what it sets out to be. Certain personalities are necessary to the story. They work best with a flawed male and female protagonist, hence the misunderstandings that will occur, thereby prolonging the story. These misunderstandings also allow for true love to have its problems, also prolonging the story. A villain most definitely is needed, and if well done, will cause the reader to detest, yet sometimes feel sorry for , or perhaps not feel sorry for them at all. Don’t expect a heroine that is strong enough to handle every situation, and also verbose enough to say exactly what’s needed when and where it’s needed. Those sorts of people rarely exist in real life, why should they exist in books? Also, if they do exist in real life, they’re usually extremely annoying. I would tell younger readers, and by younger I mean teens or young women forty and down, read these books with the same feelings that you would watch a wonderful old film. Allow for different manners and social behavior. Most of all, treat the women in these books with the gentle understanding that, to a certain extent they played by a different set of rules. Do this and I believe you will garner a wonderful reading experience.

I love owls. this is so beautiful.

Nevermore was published in 2010 and I purchased it and devoured it immediately.
It is a story about a girl and a boy who are very different, and drawn to one another in spite of, perhaps because of, those differences.
It is also largely about supernatural forces at work and paranormal experiences , and these revolve around the boys interest and involvement with the works of Edgar Allen Poe, an American author who lived during the early nineteenth century. His writings and personal experiences with a dreamworld and the inhabitants thereof, directly affect the two main characters and ultimitely their families and friends as well.
For me however, and most readers I suspect, this book is about the relationship between a cheerleader with a functioning “normal” family, and a goth boy who lives a troubled life, for a myriad of reasons. Seemingly as different as night and day, sunshine and darkness, Isobel and Varen are drawn to one another. They are thrust into a situation neither can get out of, and so must work together, and this initial pairing leads to an attraction that neither can deny. It results in a string of actions and reactions by family and friends, and Varen’s foray into the dreamworld and its jealous inhabitants increases the dangers they’re already risking in the here and now.
Some book characters have a book chemistry that’s instantly recognizable. When it’s there it’s perfect. Nevermore features just such a pair. Every interaction with these two, no matter how brief, leaves the reader satisfied, and if not satisfied, then only because the reader wants more.
Ms Creagh also blends all the components of this story seamlessly. From the scenes at Varen and Isobel’s high school, to Isobel’s home life and mother, father, and unforgettable little brother, everything works. The same can be said of Varen. His car, music, appearance, and struggle to cope with his father’s harshness, ring true.
Pinfeathers…Noc noc… If you’ve read this book then you know my references, and if you haven’t then you have a lot to look forward to. Lilith awaits.
Nevermore is one of my top favorite books to be written in the last few years. It’s a “stand out from the crowd” kind of book. It has a pefect male protagonist, and the perfect foil to his character, in Isobel. Cheerleading, eyeliner, a fiesty new friend named Gwen, and a host of other happenings make it hard to put down. It is part of a trilogy, and the second book is available as well. It is entitled, “Enshadowed”. It continues Varen, Isobel, and company’s story. The third book, “Oblivion” is expected to be released in late summer 2014. I can’t wait to get my copy the moment it’s availible. If you haven’t read Nevermore, and Enshadowed, then you need to, right now. Happy reading to all, and I promise you wont be sorry.